Forensic analysis can provide answers related to a security incident, such as:

It is intended to be used as a tool to strengthen an organization’s security posture and to deduce an adversary’s motivation more easily for individual actions and understand how those actions relate to specific classes of defenses.

The idea of this blog is to show how some MITRE ATT&CK Techniques can be detected, on the real forensic examples. The blog series will cover the adversary techniques from Initial Access, Execution, Persistence, Privilege escalation, Defense Evasion, Lateral Movement, Command and Control, Exfiltration and provide examples of how attackers have used these techniques in a Windows environment.

In the first phase of the attack, the adversary is simply looking to gain a foothold in the organization’s network. To gain initial access, a threat actor might attempt several techniques that range from simple but effective phishing campaigns to more sophisticated supply chain attacks or exploitation of remote and public-facing applications using known and unknown (zero-day) vulnerabilities.

This example will show the techniques T1078 Valid Accounts, Sub-techniques T1078.003 Local Accounts in which an adversary obtains and abuses credentials by brute-forcing the local admin password. An adversary uses automated tools to guess all possible passwords until the correct input is identified (Dictionary attack). 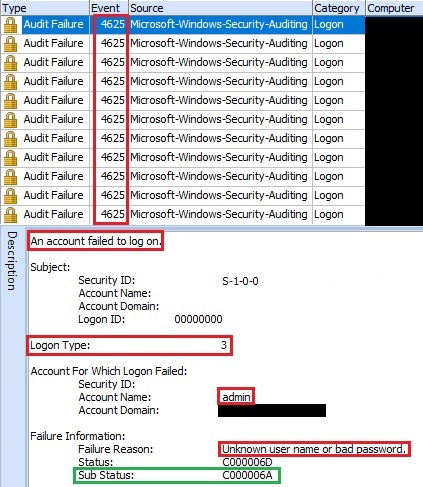 The failed logons attempts were every 2 seconds.

The next thing is to look the “Sub Status” code within the description of the Event ID “4625”. This is important because that code provides a detailed failure information.

In this case, the “Sub Status” code is “C000006A” which represents failed login attempts with the “Invalid/Wrong password”. 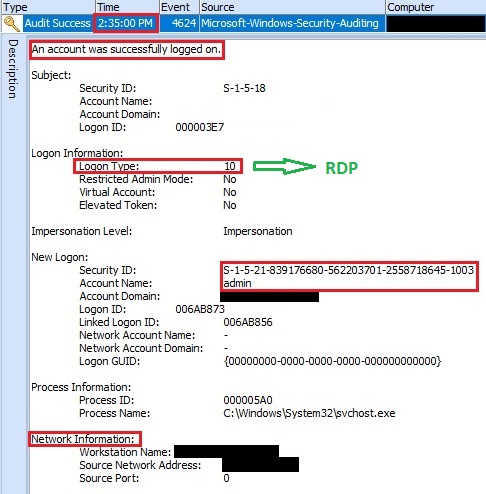 The evidence about successfully RDP connection also found in the Windows OS Event ID “21” which appears after an account has been successfully authenticated.

The adversary achieved his goal by obtaining and abusing the credentials of existing local account to gain initial access on the system. The part 2 of the blog will cover the Execution phase and techniques.